This simple 2-tube transmitter with crystal control intended for ham radio beginners in the 60’s and 70’s was published by the ARRL in “How to Become A Radio Amateur”, 25th edition, 1968.    Another version of this simple novice TX was published in the 1971 ARRL Amateur Radio Handbooks.   The earlier version included a plate meter and an optional audio CW monitoring oscillator using 2 transistors.  The later version eliminated the current meter for simplicity and low-cost, and it used a #49 panel lamp in the plate current circuit to support tuning the output pi network by tuning for a dip in current or a dip in lamp brightness.

The ARRL published this design here (see the article on “The Novice Special Transmitter”):

KA1DDB has published a design here that is very similar to the version I built:

In the fall of 1970, I built my first novice TX based on the design from the 1968 design from “How to Become a Radio Amateur” without the optional CW monitoring oscillator.   My receiver was a Graymark 511 3-tube regenerative receiver with plug-in coils, and I used this RX and TX for almost 1 year until the summer/fall of 1971.  At that time, I replaced it with a Multi-Elmac PMR-7 and AF-67 that I acquired from W3PDW, Herb Swartz, who administered the Novice license test for me in the summer of 1970 and was also my geometry teacher in 1972/73 in 11th grade. 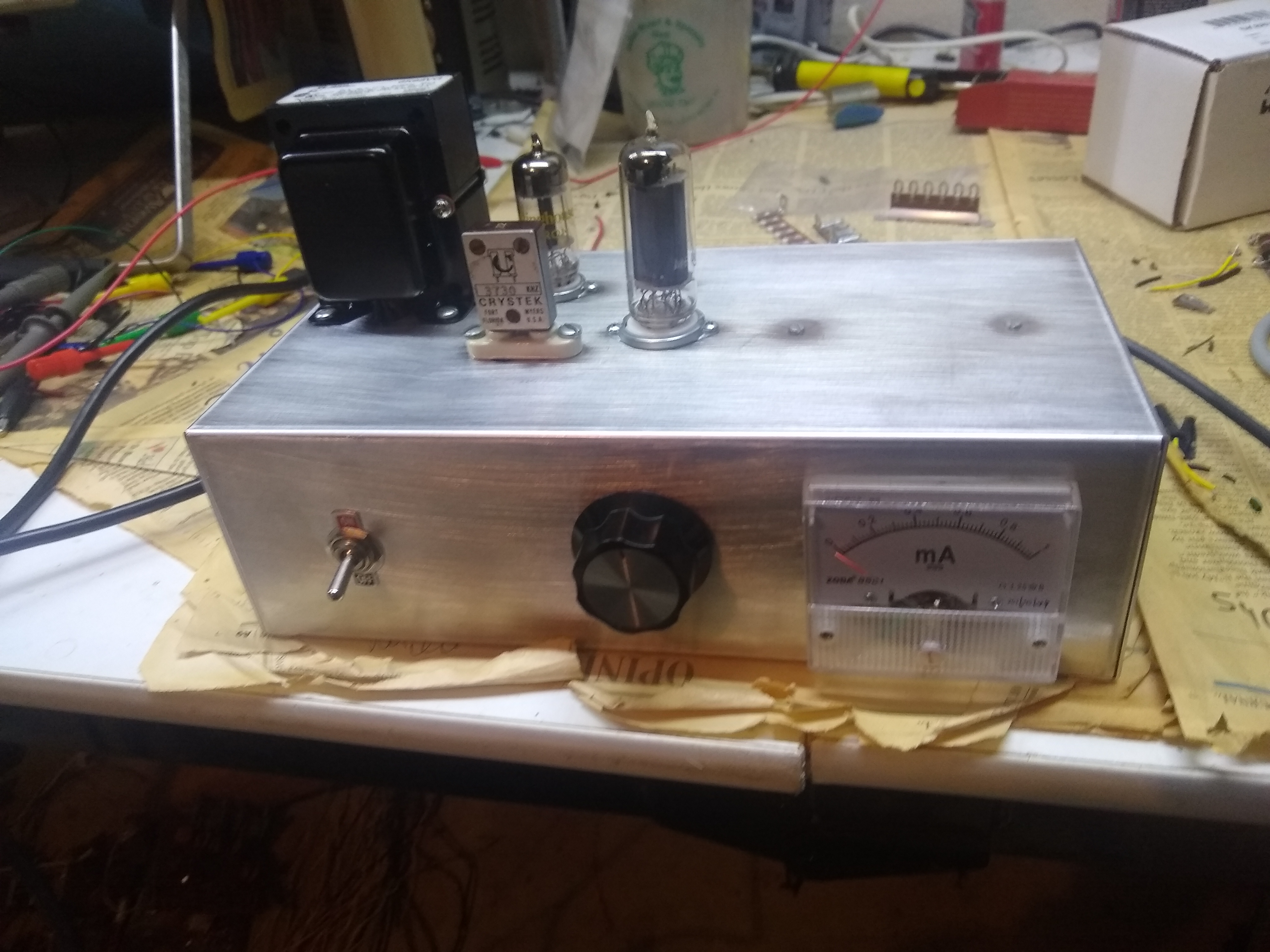 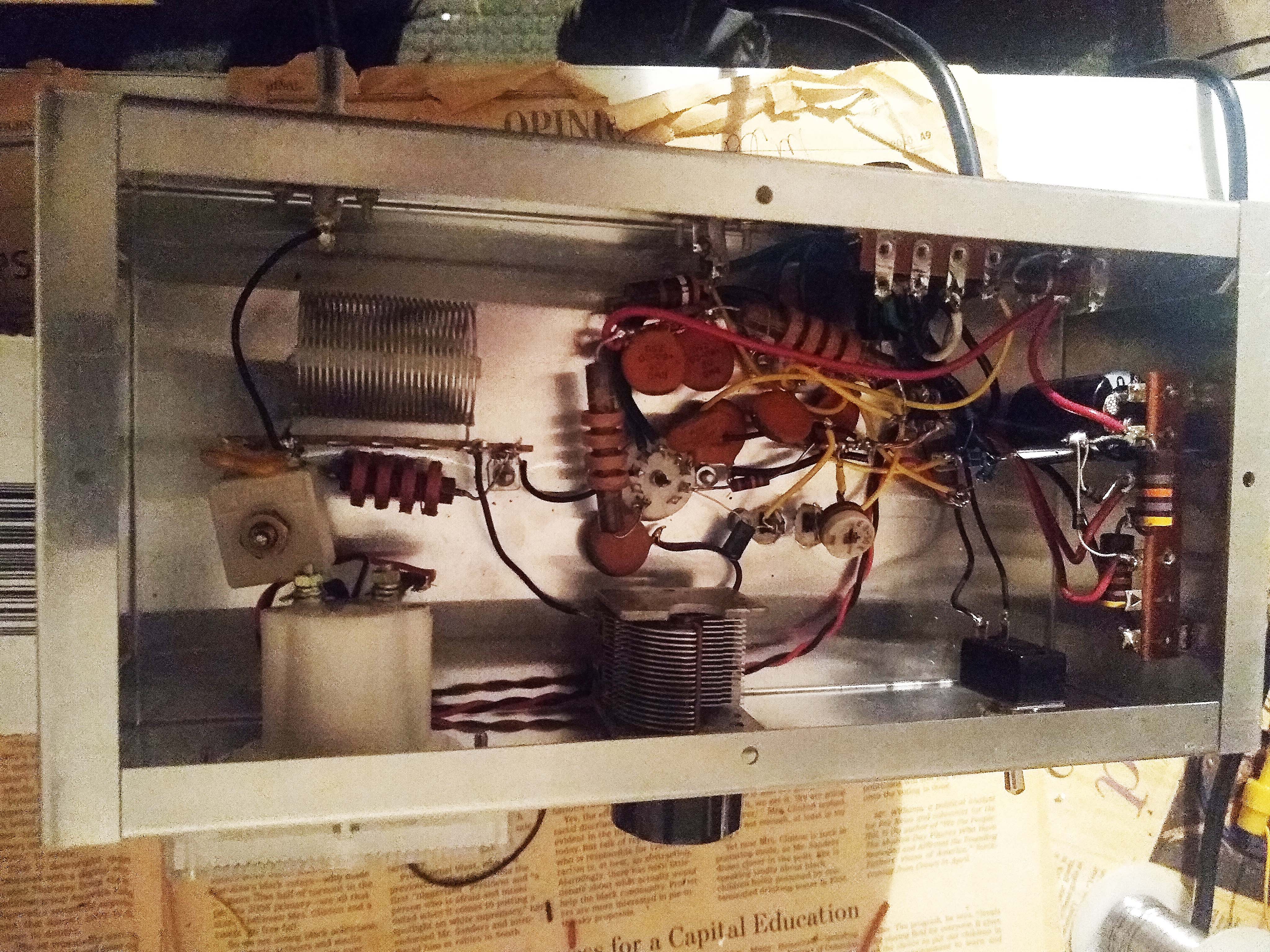 Under the 10″ x 5″ x 3″ Hammond aluminum chassis , the output pi-network is visible to the left (it was wired to support only 80 meters).  The output variable tuning capacitor is visible in the center bottom .  In the center of the chassis the underside of the 9-pin socket for the 5763 RF power amplifier is visible.  The 2-pin socket for the crystal is visible to the right of the 5763 socket.  Three RF chokes are visible:  one for the plate circuit of the 5763 RF power amp; a second for the plate circuit of the 6C4 crystal oscillator; and a third RF choke acts as a short to ground for DC power on the output circuit for safety and to drain static charges.  The 6C4 7-pin socket is just below the RF choke in the upper right.  The high voltage (~ 300V) power supply is visible to the far right with the filter capacitor; 2 diodes; and 2 bleeder resistors.  A number of cathode bypass, plate and screen power supply bypass and coupling capacitors are visible.  A phono jack at the upper left is the RF output, and another phono jack in the upper center is for the CW key input (cathode keying). 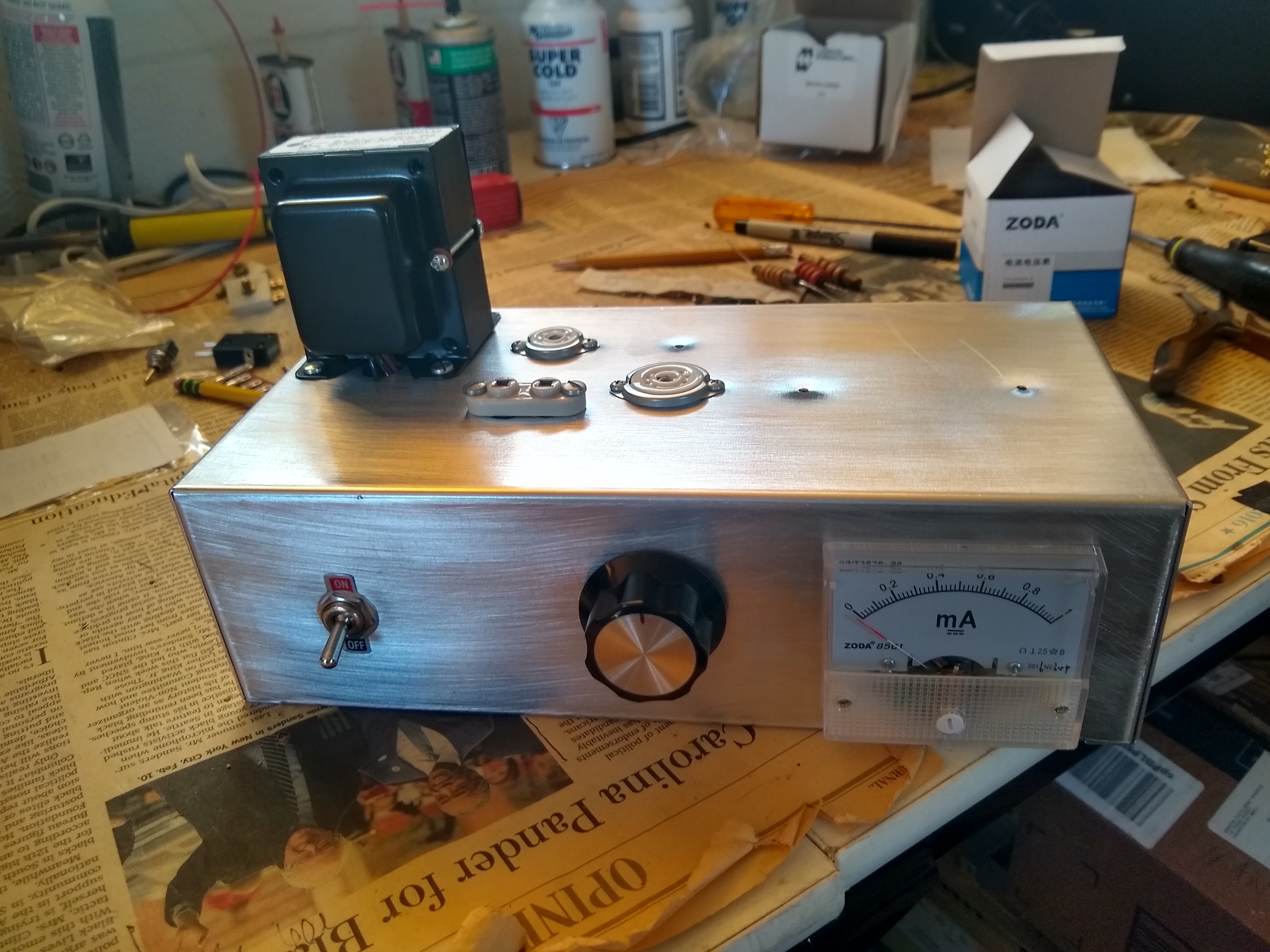 The first step was to drill all required holes in the chassis and to use a chassis nibbler for the meter hole.  The second step was to mount the major components on the chassis. 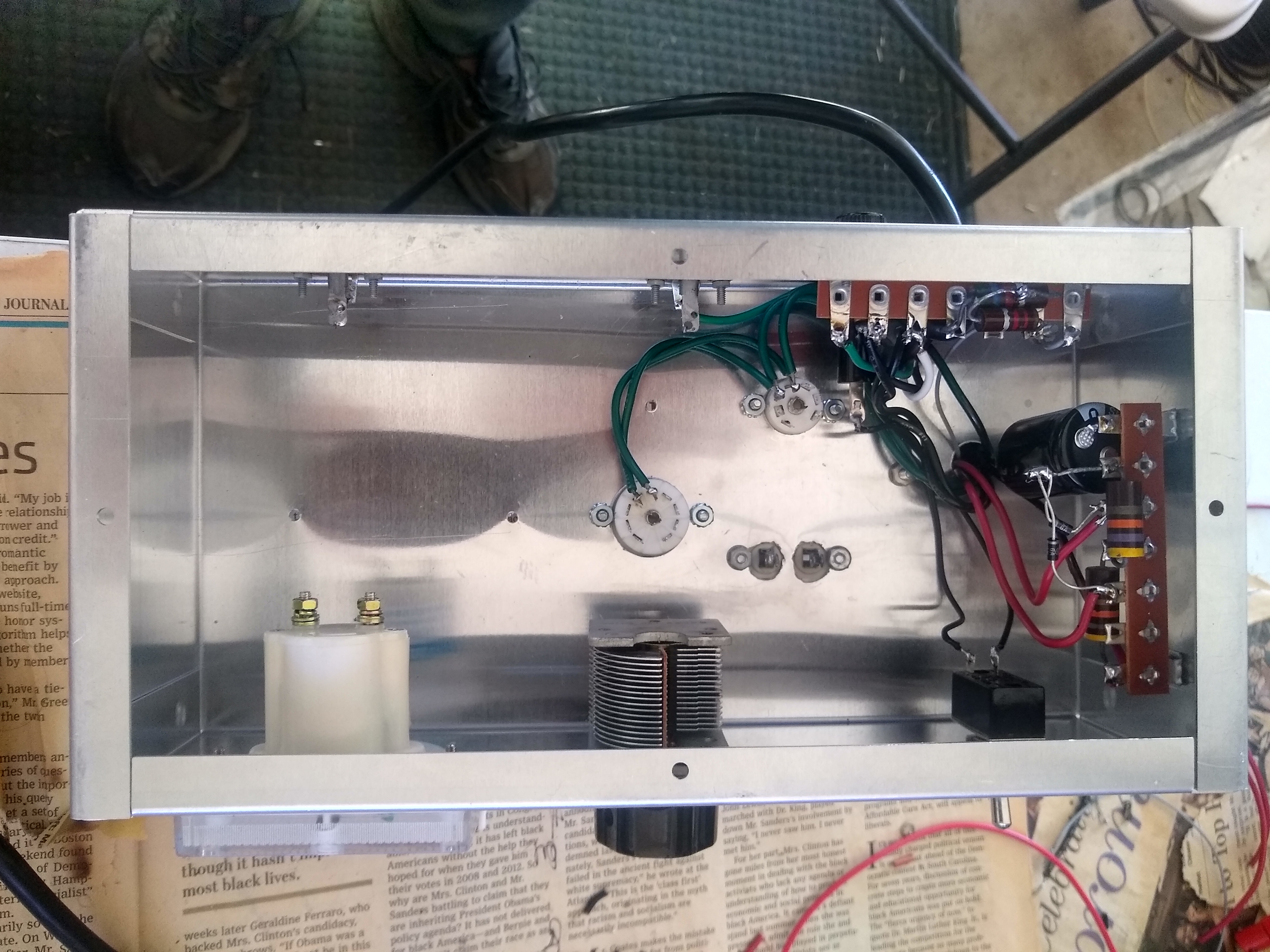 This assembly sequence is different than what was specified for novices by the 1968/1970 articles.  Those articles assumed little to no test equipment was available (which was my case in 1970 and I then followed carefully the prescribed assembly steps).  But if test equipment is available, bringing up the TX in steps (filaments, high voltage, oscillator and RF power amp) is recommended. 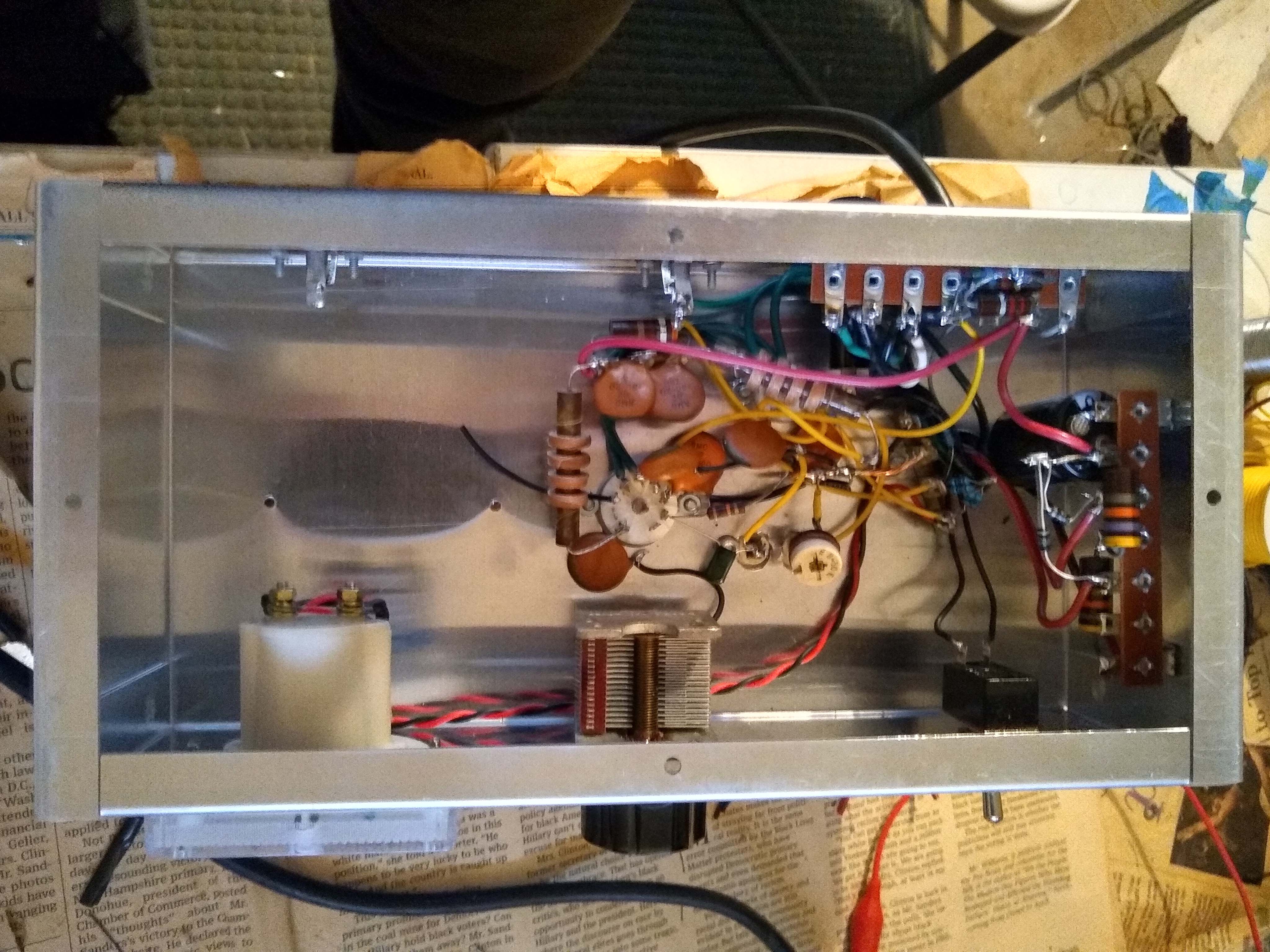 The fourth step was to wire the complete oscillator circuit and a few parts of the RF amp circuit for convenience.  Then the 6C4 oscillator tube and a crystal were plugged in for testing (the 5763 was not plugged in).  The CW key input must be grounded to activate the oscillator.  The output of the 6C4 oscillator was observed on an oscilloscope.

The fifth and final major step was to complete the 5763 RF amp circuit.  After a review of the circuits, the transmitter output was coupled to an RF power meter and to a dummy load.  And then the TX was powered up and tested.  After adjusting the front panel tuning knob for a dip in the RF amp plate current while keying the TX, the output power was measured at about 12 watts on 80 meters.  The plate current was about 60 to 65 ma after tuning.  Since the plate voltage drops to about 275 to 300 VDC during keying, the power input is about 18 watts. 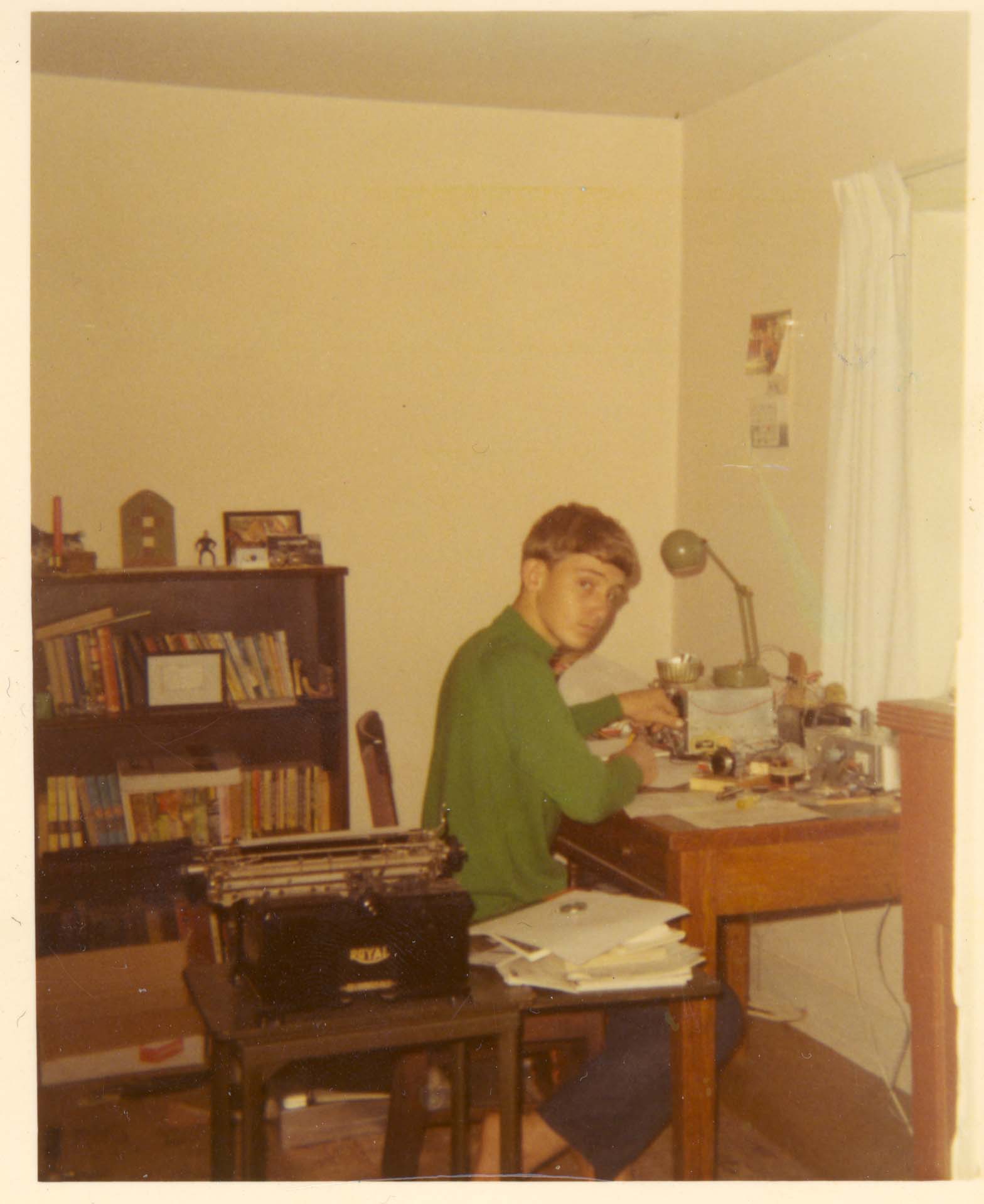 My Novice Special is visible on the right corner of the operating table of my first radio shack in 1970/71.   My call was WN3PKU, which I upgraded to Advanced class (WA3PKU) in July of 1971 and then to Extra class in 1973.  I used a recycled tube-based TV transformer to save cost instead of the specified transformer in the ARRL design article.  The TV transformer was too large to fit properly, so it sat directly on the operating table to the left of the TX chassis with the transformer wires connecting to the circuits in the TX chassis.  My Graymark 511 3-tube RX is not visible in the photo.  When the photo was taken in the fall of 1971,  I had just passed the advanced class license and was experimenting with an ARC-5 RX and a QRP transistor based TX with a VFO (novices were required to use crystals for frequency control).  My first antenna was a simple ~ 100 feet random wire against a ground rod and I used a slide switch for T/R switching which is visible in the picture (light brown small wood panel to the left of the TX).   No coax was used in the station.

In 1970, the exact parts for this simple TX were readily available, but that is no longer the case.  However, the Hammond aluminum chassis, the Hammond power transformer and the tubes and sockets are readily available.  The small passive components are also readily available.  One of the hardest parts to obtain was the output circuit Miniductor 3015 coil.  I was able to find the exact part on Ebay with some months of monitoring sales of antique radio coils.   Substitutions or homebrew coils are possible or toroids,  of course.  There are a few folks selling crystals, but most have small elements designed for low-power transistor circuits.  I was able to find high power crystals intended for tube circuits with some searching.    The traditional multi-section RF chokes are also a bit hard to find.  The current meter is a substitute and a bit larger than the original.  I used hardware and bypass caps recovered from a Heathkit parts rig.  Overall, obtaining the required parts was a fun exercise, but it required some time and patience. 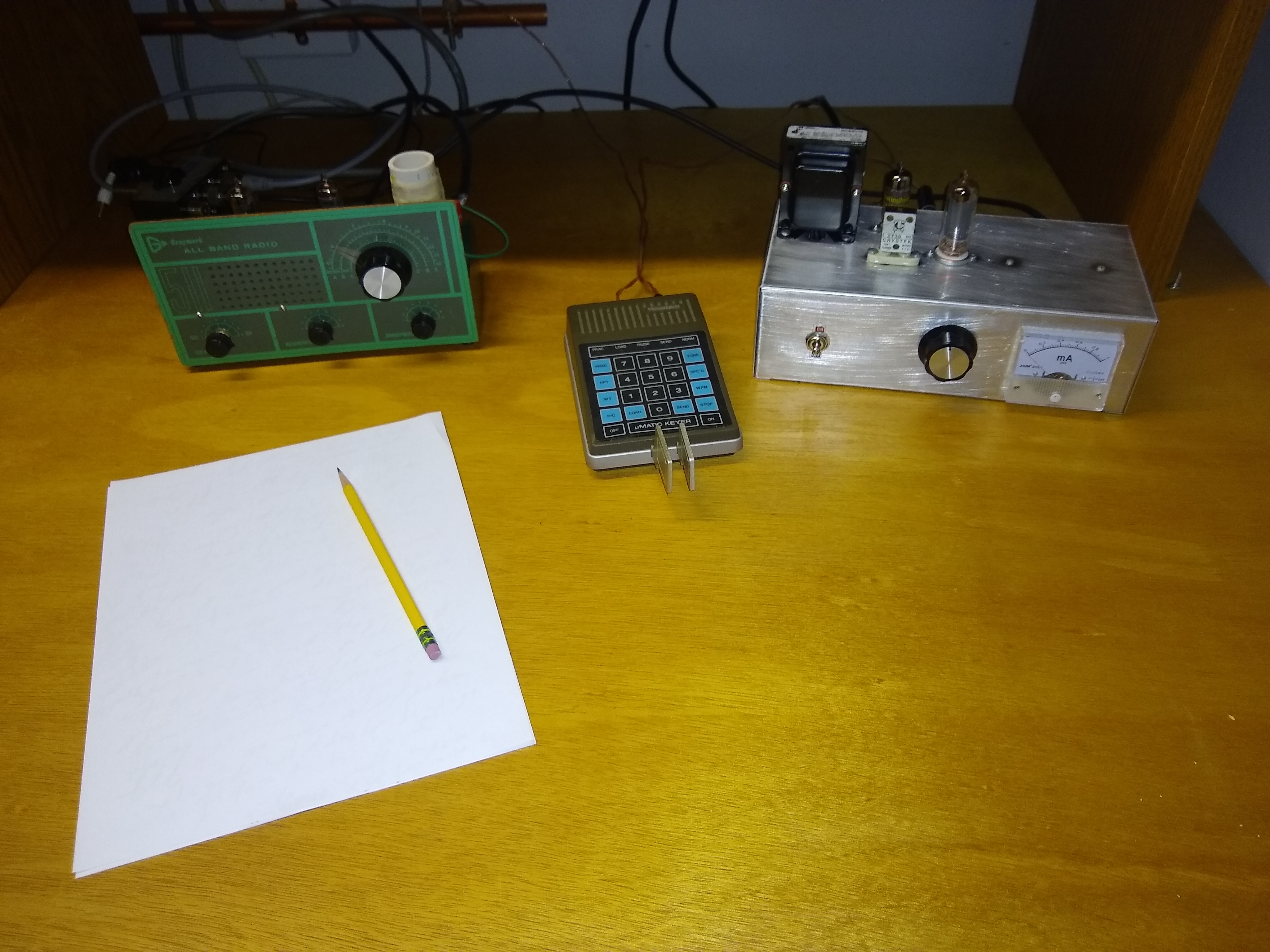 My reconstructed Novice station in 2020.  I decided to use a Heathkit Umatic iambic keyer with the Novice Special.   Besides ease of CW operation, it includes a CW monitoring  audio generator.  In my original station, there was no CW monitor, but the 511 RX generated a buzz when the TX was keyed.   A coax switch to the rear left of the Graymark 511 provides T/R switching.

The RX is a significant limitation with this setup for CW reception.  It is fairly sensitive, but the selectivity and stability are very poor. It requires frequent adjustment of the tuning.  It is also subject to pulling by stronger signals which causes the CW audio tone to swing significantly, and there is no AGC.  As a result, it can only be used when there are only a few signals on the band, and even then with some effort.  But it is a fun challenge to use.