Remote Control of the radio shack is implemented using a local PC in the radio shack to control the FT950 rig and other key equipment and to provide an interface for 2-way audio over the Internet.  The local PC is then remotely accessed by a remote PC using TeamViewer (free for personal use remote PC access application) over the open Internet. 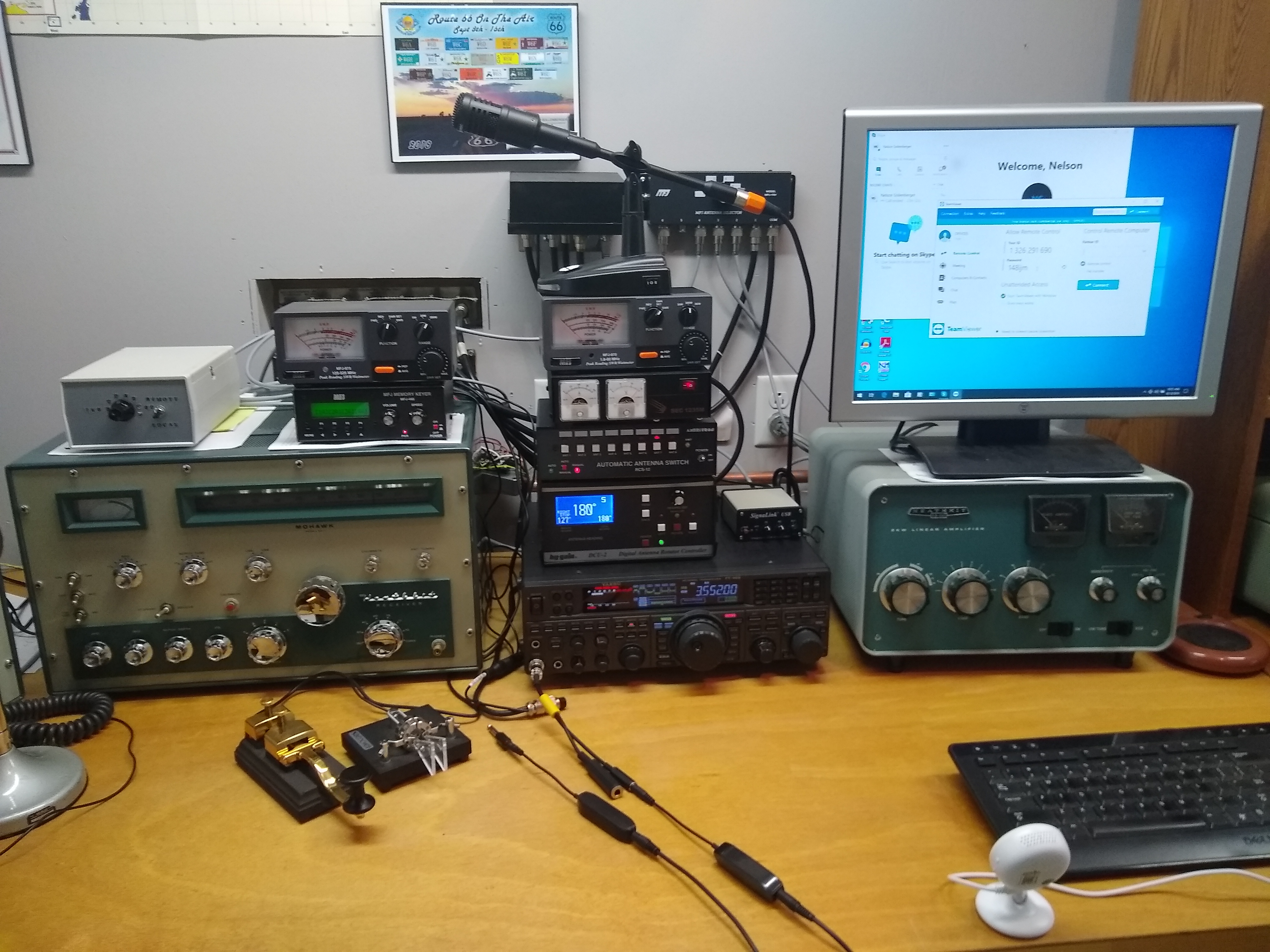 This method allows for good flexibility in configuring the system and gives you the power of an open PC in the radio shack which is then also available for general use in the shack.  The downsides are less control of latency and a requirement to setup and configure a number of PC programs.  Many hams have setups for remote ham radio systems.  Some prefer systems built specifically for remote ham radio operation.  Many also use software systems such as HRD.   Some systems now optimize for remote operation such as Flexradio.

The complete list of items which are controlled remotely for my shack are:

One key issue in my situation was finding an approach for true broadband internet access to the radio shack which was solved by setting up a dedicated point-to-point WiFi access link over a 1+ mile path (described under WiFi).  Another feature that may not generally be found in remote ham radio is the KA2C 160/80 meters antenna system with remote control of band segment selection.  The 160 meter band has 4 segments which are selected by relays at the antenna center to switch IN/OUT small linear loading elements, and the 80 meter band is similar.  This provides full coverage of these 2 bands with fairly low VSWR.

An UPS rated for 1000VA provides power for the PC, rig and the entire setup required for remote operation.  Following the UPS, a WiFi power strip supports turning ON/OFF the entire system remotely.  This allows power cycling the PC and all of the equipment in case of a failure as long as the WiFi power strip is functioning which is important for reliable remote operating.

As other hams have noted, the PC in the radio shack must be configured to fully boot all the way to the user account and then automatically launch TeamViewer.  Some of the key issues are to configure the boot to automatically launch Windows, not requiring a password to enter the user account, and placing a TeamViewer reference in the Windows startup folder.  TeamViewer is free for personal use.  It allows the remote PC to be controlled very close to 100% as if you are at the remote PC.  The only clear major exceptions are those few things that require local mechanical intervention such as the PC ON/OFF switch and DVD insertion.

Some hams use Skype for 2-way audio for phone QSO’s.  Some have used the 2-way audio built into TeamViewer.  I ended up using a SIP account with  Callcentric.com and I use the PhonerLite Internet audio application (both free for personal use and easy to setup).  For all of these options, it is necessary to setup 2 user accounts for the application associated with 2 separate email accounts (one for the radio shack PC and one for the control/remote PC).  Recent versions of TeamViewer do not allow the remote PC to enable the local mic function on the other PC to protect privacy, but that feature then defeats its usage for remote radio.  Skype works well, but I found that it does not allow the user to manually control various audio processing functions such as AGC, echo cancelling, noise suppression and silence detection.  That resulted in certain problems.  The PhonerLite application gives the user full manual control of audio processing, and for my system these types of audio processing functions are generally disabled which provides unprocessed audio from the remote rig to the operating PC.  After some investigation, I configured both ends of the PhonerLite application to use a 48 KHz ADC/DAC sample rate which is the native rates in many PC sound cards, and hence avoids sample rate conversion delays in the buffering.  I enabled only the 16 KHz linear PCM codec at 256 kbps which does involve a 3:1 sample rate conversion, but the impact is mitigated compared to lower sample rates such as 8 KHz.  This was done to minimize latency in the audio to and to provide excellent quality.  It does require a broadband Internet link for reliable operation.

Ground loops in the audio connections from the rig to the audio board in the PC are a common problem and will almost certainly be an issue for anyone setting up remote operations.  I found there are inexpensive stereo isolation transformers available with standard 1/8″ stereo plugs/jacks that are easily installed for both transmit and receive audio in the system and that eliminate the ground loop problems.

The interfaces from the PC to the rig and other equipment are as follows:

I decided to use direct serial com ports for interfaces 1, 2 and 4.  This was supported by installing 2 dual serial port PCIe cards into spare slots in the shack PC.

The RF power amp in the shack is a legacy Heathkit SB-220 which has no provisions for remote control.  I have not set up any adaptations so far.  A modern RF PA with remote control features is the preferred approach for full capability.  An approach which would make use of the legacy amp would be to power it ON/OFF with a WiFi power outlet and then tune it for a single operating band segment.  This would limit high power operating to a single band, such as 40 meters or 20 meters phone. 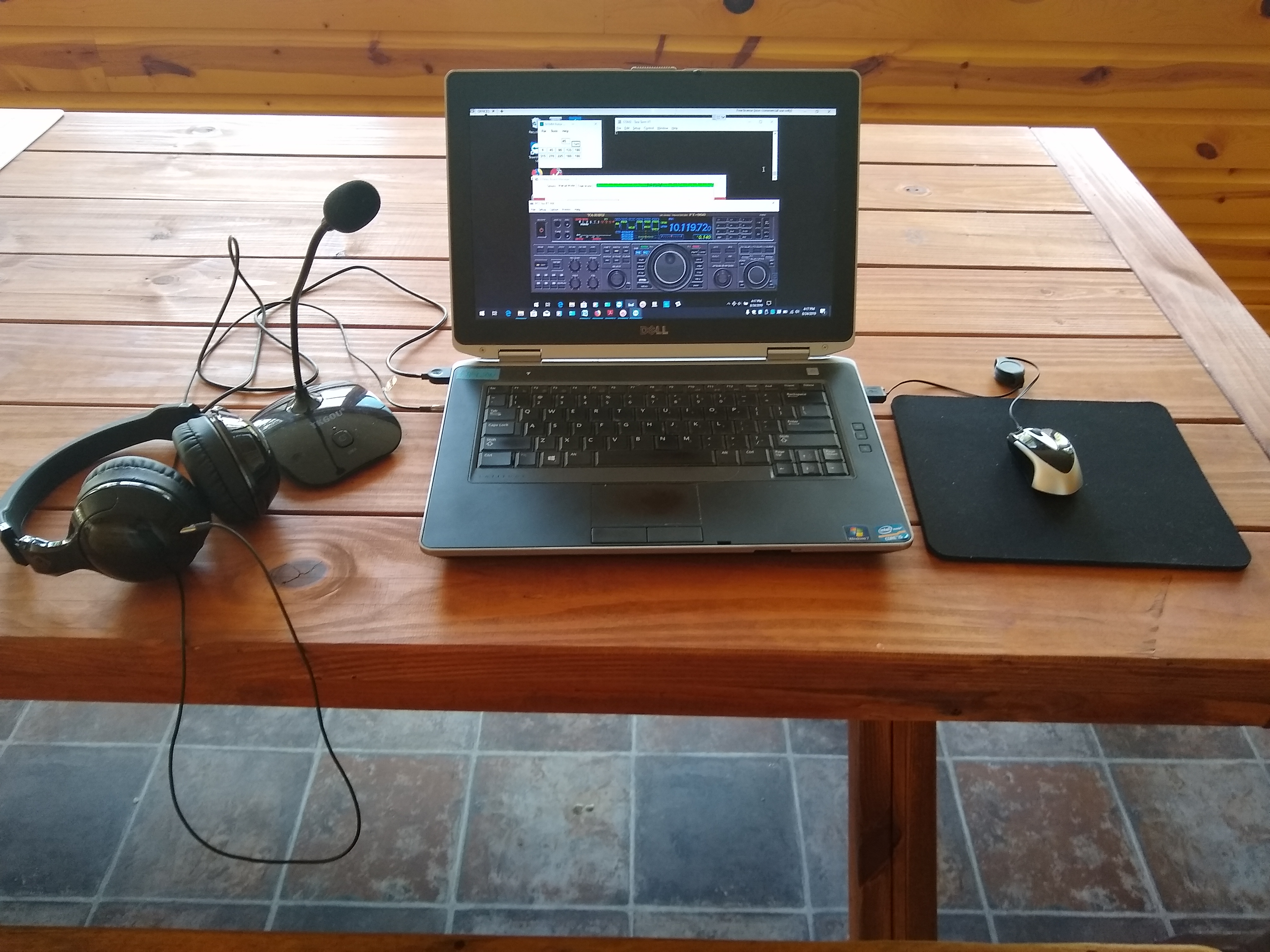 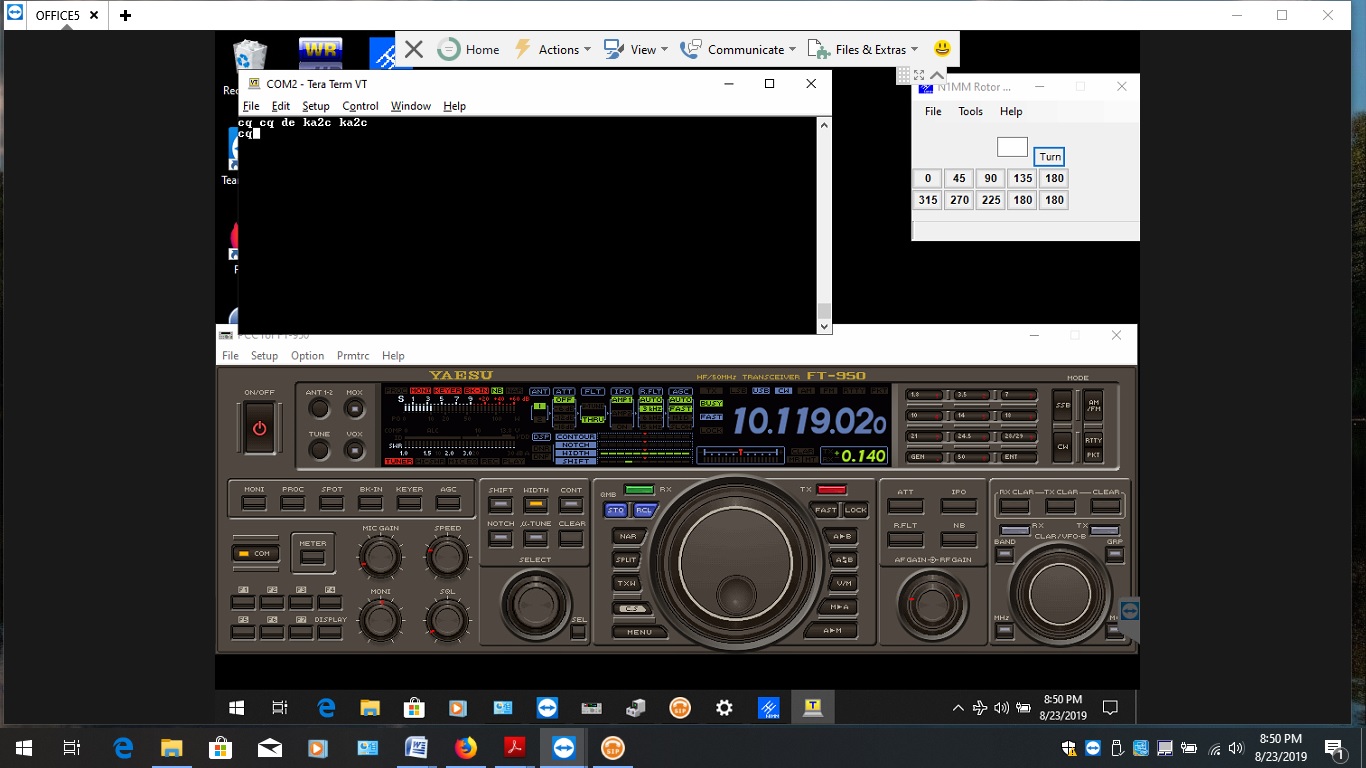 The remote control PC (laptop) looks like this during operation.  An image of the FT-950 appears which is the PCC-950 software app running on the shack’s PC and remotely accessed over TeamViewer to the control PC.  The rotor is controlled by the N1MM rotor software, and Tera Term controls the MFJ-495 CW keyer.  Not shown is the relay control app for the KA2C 160/80 meter antenna.  It has individual relay controls, so a specific sequence from a small table must be entered to select each band segment.

For the remote control PC, a USB mic with a local PTT switch is used.  The rig is set for VOX operation.  Also an external speaker or headset is used for receive audio.  CW keying is keyboard based which eliminates the need for paddles and the problems with latency in the CW audio.

3- Start teamviewer on local PC and connect to shack

These codes can be entered 1 bit at a time using the off-the-shelf SW which is actually fairly quick.   A future project is to generate scripts or other SW with 8 icons on the shack PC desktop to allow 160/80 meter band segment selection with a single click.

11 – for CW operation, use keyboard to operate send code with MFJ-495; set the audio monitor on the FT-950 mid-way to monitor CW transmit

2- Wait 30 seconds for PC to shutdown